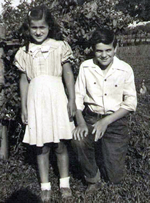 “All through my boyhood, I must say I loved the South in certain ways: the easygoing life, my mother’s deep sense of hospitality to others which led to my own natural sense, the sounds of things – like a swinging screen door or rain on the tin roof of a small porch where I slept. The smells of collard greens or fresh butter churned. The Huckleberry Finn moments on the River.”

Seeking Truth On The Banks of The Mississippi, Father David Kirk

“Once we lived in a house on stilts twice a mans height, ready for floods, with an outhouse, lamp light, no running water. I was waterboy among sweating field workers in cotton fields and waterboy, bringing numerous daily buckets of water from a spring, for washing clothers, house cleaing, baths. I would often lay in the grass by this stream naked, dig my toes in the grassy earth, look up at a blue sky and trees waving with the wind and seeing a kind of geography of the universe. I would lay on the grass dream about a golden city up ahead and heroic brotherhood there, battling for justice. Listening to the thrilling whistling of the Southern Railroad, rushing into the future. Sometimes I think this boyhood sceen was the groundwork for a prep into the universe that is God, and the dreams and visions I could hold to my heart. I do not know that I ever thought about God, or if God was, in my boyhood. My boyhood passed like a swallows flight, living on both sides of the Mississipii River. We were poor, but never really knew it.”

“Even as a little boy I had eyes that could see and I saw deeply: racism, sharecropping, nigger shacks, lynching before the Courthouse square, hounddogs, white citizens council. Since the nearest white boy was 10 miels away, my playmates were black kids, sharecroppers, until I was 12. After then, there was no place, no space where you could simply speak with a black person.”

Notes on a Journey on a Road to Emmaus, Father David Kirk

Audio of Father David speaking about growing up in the south. (WAV format 1.64 Mb)