Father David Kirk has published books and has had been mentioned in several. 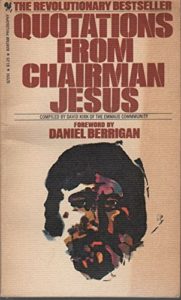 The book was Father David’s response to Mao Tse Tung’s “little red book”, Quotations from Mae Tse Tung, that explained to the people of China the ideology of the Communist Party. Chairman Jesus was a response to that and was written for the purpose of raising money for Emmaus in it’s early years. The foreward was written by Father Daniel Berrigan.

“Claims that Jesus was a radical champion of peace and justice seldom go for support beyond the scourge of the temple money-changes. Kirk, of New York’s Emmaus Community, finds backing throughout the words of Jesus, in other parts of the New Testement and among early church fathers.” New York Times

“In the end, of course, the best presentation of the Gospels is one’s own life. But we must do this translation together. ‘Quotations of Chairman Jesus’ has come from the attempt of one group, Emmaus House in New York City, to answer the question always before us: What is the meaning of Jesus for our lives now, for men in general. We have many questions, not many answers. Like the disciples on the road to Emmaus, we are searching; we risk the unknown, putting everthing to the test. These are the notes of fellow searchers, travelling with the rest of men, sharing what we have experienced and discovered so far, like one beggar who tells another beggar where to find bread.”

Father David Kirk quoted in: The Road to Emmaus, The Story of Emmaus in Harlem, Jim Brady

The Underground Church – Malcolm Boyd (Chapter 11 – Emmaus: A Venture in Community and Communication by David Kirk)